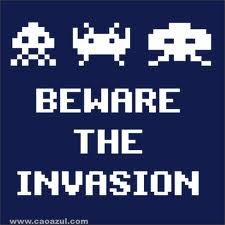 She arrived late, with her husband in tow.
I wasn’t sure what is was, but straight away I felt annoyed.
Maybe because she was sitting next to me in one of those fold down seats where your personal space is invaded by strangers you will hopefully never meet again.
She took a long time to settle down.
Wanted to know where we were up to in the program.
I smiled and pointed it out on my own, then she spent the next minute or so flipping through her own to find the reason she was there — obviously some child with a cameo up on stage by page 57.
Then she talked.
She talked to the man next to her who I assumed was her husband but maybe he was someone else entirely.
When the band came on she was so bored she began clearing out her purse, sorting receipts and other papers into piles then filing them accordingly.
Then she started on her bag.
Finally her stars did their bit on stage after which the family exploded from the fling back seats, busy to get on to the next event.

And that’s when I realised why she’d annoyed me so much.
She reminded me of someone I used to know.
Me.