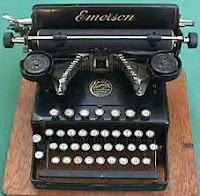 You know you are dating yourself when you tell someone you used to have a typewriter. Maybe not one as old as the one featured here, but a typewriter nonetheless. It was called a portable typewriter and the keys were pretty flimsy but I did a lot of work on that machine during high school and I still can’t bear to put it on the hard rubbish collection.

I was thinking about my portable typewriter the other day when hanging around Officeworks faced with a dilemma. My printer at home, only a couple of years old (yet ancient in computer terms I suppose) had been a bad choice at the outset. Six ink cartridges instead of four. Great output but magically the ink would run out just when I needed it. After several years of paying for the the ‘correct’ ink, I had purchased some ‘no name’ ink and it proved a disaster. So standing at Officeworks and wondering whether to buy the ‘correct’ ink again, or chose a printer/scanner/copier for not much more with the added bonus of only four ink cartidges.

My portable typewriter preceeded the auto-correct ribbons. It was just a two-tone ribbon – black and red – and once it spooled through the first time, I turned it around and used it again, and again, until the keys wore through. My 2007 laptop is already old-hat. My phone has been superceded… Oh my goodness. I’ve started talking about the good old days!