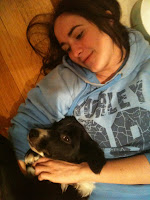 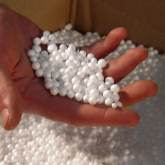 To recap what I’ve talked about before…

My daughter (see pic with cat, taken some time ago) is mad about animals. For her 18th birthday she begged for a border collie, which she found herself after some work on the Internet etc etc. Said dog is Marley, who took her time to be convinced that you didn’t just squat and do your business whenever the urge took you.

Anyway, Marley is now past the puppy teething stage, but she was obviously bored (and a little cross that we have left her to her own devices a little too long) for we got home to a white Christmas the other night. All around the Christmas tree were drifts of white bean bag beans. She’d done a wonderful job opening the zip on the bag and tossing cheer all about the room. We are still picking beans up all throughout the house.

Marley. The gift that keeps on giving.

(I would show you a photo of the event, but the cord for the camera seems to be missing — fodder for another blog!) 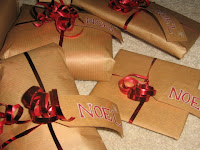 The weekend papers were full of letters to the editor with the ‘bah humbug Christmas’ being the dominant theme. I suspect that if I delved back into the archives of ten years ago I’d find similar letters.

So a confession. I love Christmas. Even in my most run-down moments, life is crazy and I can’t even think let alone get to the shops to buy a present moments, I love Christmas. One of my favourite jobs ever was as a present wrapper in a gift shop as a teenager. I loved that job. I helped people find just the right present, we’d have a chat about life, and I’d wrap the present with TLC. We worked on Christmas Eve until 5, then shared a Christmas drink (strictly lemonade for me, of course) then back home to our own Christmas chores. I understand Christmas isn’t for everyone. But for those who don’t enjoy it, I say, ‘Live and let live’.

Now please excuse me, but I’m off to write my list for Santa…

You know you’re getting old when…

you do things for nostalgia, not because you necessarily want to. I pondered this thought as I sat through another Christmas Carols event at our local common. When I say another, it was about our tenth, with last year being such a disaster that we nearly didn’t front this year. Yet, traditions are hard to break. The children running amok were no longer my own — they had kindly attended but spent most the evening chillaxing with their friends. Santa did make an appearance and recorder man was back again, after missing in action last year. Our brave group sang along with the booklet, even when the words were misspelled or totally different (ie several lines missing). But numbers were down, and old faces missing and the stage and jazz group from Christmas past was nowhere to be seen. There was no checking out the neighbour’s Christmas light displays this year. The egg nogg was great, thanks Trev, but two glasses were enough and I was hankering for bed. Bah and humbug. And then the miracle. All that time spent getting the ‘right’ presents paid off. It really is better to give than receive. In fact, it’s quite a selfish act. I just won’t tell anyone…
I think we should have Christmas once a month. Take the time to say Merry Christmas to complete strangers. When really, what we are saying is, hey, I see you. You’re worth saying hi to. Aren’t we lucky to be alive…